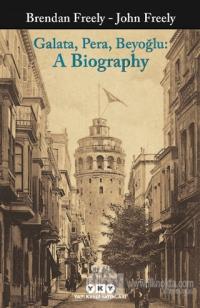 Galata, Pera, and Beyoğlu street by street, step by step... An unusual “biography” from John Freely and Brendan Freely: Avenues, neighborhoods, hans, and passages that have been embracing various cultures and identities for centuries, changing day by day but never losing their unique characters.

Books about Istanbul invariably focus on the historic peninsula but Galata, Pera, Beyoğlu: A Biography concentrates on Beyoğlu, the district on the north side of the Golden Horn across from the Constantinopolitan peninsula. This book follows the development and social history of the district street by street from the earliest settlements on the Golden Horn to the most recent settlements around and beyond Taksim, examining not just the buildings and those who built them, but those who lived in them as well, from murderers, gangsters and prostitutes to bankers, diplomats and socialites.