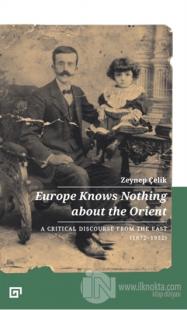 Europe Knows Nothing About The Orient

https://www.ilknokta.com/zeynep-celik/europe-knows-nothing-about-the-orient.htm
Europe Knows Nothing About The Orient A Critical Discourse From The East (1872-1932)
Koç Üniversitesi Yayınları
160.00

This remarkable work of scholarship off­ers a rarely-examined view of Orientalism: that of Ottoman and Turkish observers from over a century ago until the 1930s whose critique of the Western gaze anticipated that of Said and other modern authors. Europe Knows Nothing about the Orient constitutes a valuable addition to the slim library of responses to Orientalism from “the Orient” itself.

Europe Knows Nothing about The Orient is essential reading, compiled by Çelik with magisterial scope and erudition, and preceded by an introduction that will be a guide to scholars for generations to come. Çelik's volume reveals a worldly, intellectual, cosmopolitan late Ottoman world, one engaged both in “projects of modernity,” and in sharp critical assessment of the assumptions of the European scholars regarding the “Orient.” It thus has the eff­ect of both contesting Orientalist theorists of the 19th century, as well as disrupting those of the 21st century, who tend to locate the enterprise of theoretical salvation of the Orient in the realm of Euro-American intellectual thought.

Europe Knows Nothing about the Orient brings together eye-opening critical texts on Orientalism by angry Ottoman and Turkish intellectuals. The collection is astutely introduced by Zeynep Çelik, whose work is essential to understand the cultural modernization of the Ottoman Empire and the Middle East.

Since Edward Said's germinal work defined Orientalism as a key technique of imperialism, few studies have considered local expressions of resistance to it. Framed around five themes, along with a definitive introduction, Zeynep Çelik's masterful volume curates stories, articles, and commentaries from Turkish language-texts that lend voice to imperial and nationalist dreams. Beyond providing primary sources from the “Ottoman East” that add nuance to understandings of Orientalism as merely imposed upon unsuspecting and compliant subjects, the texts Çelik explores o­ffer fascinating reading as the selections display the richness and vigor of intellectual debates about Western cultural hegemony in late Ottoman Empire and early Turkish Republic.
Selim Kuru
Associate Professor
Near Eastern Languages and Civilization, Chair
University of Washington