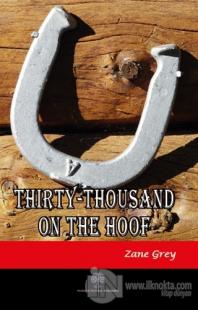 “It was autumn before Logan Huett was released from his military duties, once more free to ride where he chose. Leaving the reservation with light pack behind his saddle, he crossed the Cibeque and headed up out of the manzanita, scrub oak and juniper to the cedars and pinons of the Tonto Rim. The trail climbed gradually. That same day he reached the pines and the road General Crook had cut along the ragged edge of the great basin. Huett renewed his strong interest in this mesa. From the rim, its highest point some eight thousand feet above sea-level, it sloped back sixty miles to the desert. A singular feature about this cliff was, that it sheered abruptly down into the black Tonto Basin on the south, while the canyons that headed within a stone's throw of the crest all ran north. A few miles from their source there were deep grassy valleys with heavily timbered slopes. The ridges between the canyons bore a growth of pine and spruce, and the open parks and hollow swales had groves of aspen and thickets of maple.”