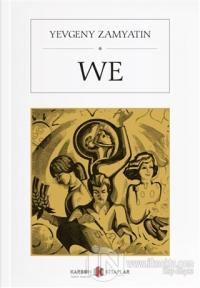 Yevgeny Zamyatin was born in Russia in 1884. A friend of Gorky, Zamyatin was an enthusiastic supporter of the Revolution at first. WE, written in 1921 and 1922, was circulated clandestinely, and even though it was denied publication, WE became one of the most influential and talked about novels of this century. Zamyatin was exiled under Stalin and died in Paris in 1937. His master - piece remains unpublished in his native Russia.