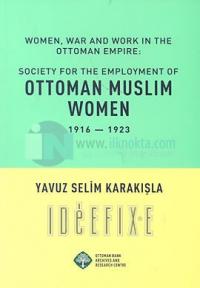 Women , War and Work in the Ottoman Empire : Society for the Employment of Ottoman Muslim Women
Yavuz Selim Karakışla

https://www.ilknokta.com/yavuz-selim-karakisla/women-war-and-work-in-the-ottoman-empire-society-for-the-employment-of-ottoman-muslim-women.htm
Women , War and Work in the Ottoman Empire : Society for the Employment of Ottoman Muslim Women
Osmanlı Bank.Arş.ve Araş.Merkz
24.00
On 14 August 1916, the Committee of Union and Porgress, the ruling party of the Ottomon Empire, established a new society under the leadership of on of its leading figures: Vice , Commander ad Minister of War, Enver Pasha. The Society fot the Employment of Ottoman Mulism Women (Kadınları Çalıştırma Cemiyet- i İslamiyesi) was a Unionist organization crated to find employment for Muslim women in urgent economic need. Within a matter of months, it received more than 14,000 applications and was soon employing 8,194 destitute Muslim Ottomoa women in its own branches and in the related state and military institutions. In time, it would offer jobs to an aggregate number of 20,000 women workers and become the leading employer of Muslim women in the Ottoman Empire.

This comrgensive work coonstitues both a case study of Muslim Ottoman women during World War I, and a detailed analysis of the foundation, organization and activies of the society crated to find employment for them.
(Arka Kapak)