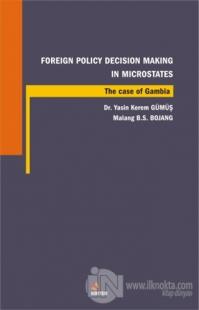 This book aims to explore and determine which domestic factor(s) are more decisive in The Gambia's foreign policy decision-making. The book further investigates whether The Gambia's traditional liberal foreign policy of the First Republic has change direction under the Second Republic and if it does, what are the factors responsible for such foreign policy reorientation under Jammeh.

Employing the neo-classical realism theory, data has been collected for this book from both primary and secondary sources. The findings of this book have shown that domestic factors are more compelling in Gambia's foreign policy decision-making. We observed that personality and character of the leader, economic development and natural resources, and diplomacy are too strong and decisive in foreign policy formulation in The Gambia. Equally, our book also shows that external factors such as international organization and alliance formation are significant in foreign policy making in The Gambia. Foreign policy formulation in The Gambia is highly personalized, centralized and bureaucratic in nature. Since previous research to some extent, failed to show the nexus between domestic politics and small states foreign policy making, this book could be a valuable reference material for both scholars and policy makers.