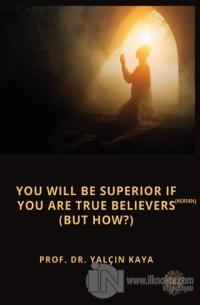 You Will Be Superior If You Are True Believers (Koran) (But How?)
Yalçın Kaya

https://www.ilknokta.com/yalcin-kaya/you-will-be-superior-if-you-are-true-believers-koran-but-how.htm
You Will Be Superior If You Are True Believers (Koran) (But How?)
Platanus Publishing
65.00

The problematics of religious groups and individuals in approaching religious resources:

1. While perceiving religious issues, instead of looking at what GOD, OWNER OF RELIGIOUS DAY, says on these certain issues, the opinions of individuals are taken into consideration and therefore erroneous approaches are made.

2. It is the fact that some people who have enough religious knowledge to comment on the principles of religion, while making comments, instead of relying on religious sources, they add something from themselves to the revelation and create information pollution, far from the truth. And this is due to the fact that people who listen to scholars follow their system of thought without thinking

3. What every member of religion or community should consider is that they're supposed to abandon their own interpretation or the thought background of the community to which they belong, and try to perceive religion in ways that Allah has revealed to them. However, Allah will not judge people according to the opinions of their congregation or sect leaders, but according to the extent to which they obey the orders and prohibitions that Allah has placed.

If people truly believe in Allah, they only have to follow Allah revelation. Then why do people see themselves on the right path by excluding others, thinking that their religion, community and sect have been saved, rather than leaving the choice to Allah as to who is on the right path.