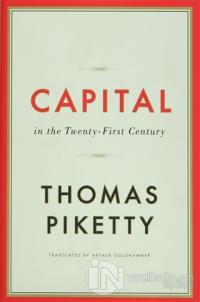 '' It seems safe to say that Capital in the Twenty-First Century, the magnum opus of the French economist Thomas Piketty, will be the most important economics book of the year-and maybe of the decade. Piketty, arguablythe world's leading expert on income and wealty ineguality, does more than document the growing concentration of income in the hands of a small economic elite. He also makes a powerful case that we're on the way back to 'patrimonial capitalism', in which the commanding heights of the economy are dominated not just by wealty, but also by inherited wealth, in which birth matters more than effort and talent.''

''The most eagerly anticipadet book on economics in many years.''

''Piketty has written a book that nobody interested in a defining issue of our era can afford to ignore.''

''Thomas Piketty's new book, Capital in the Twenty -First Century, pains -takingly details the dynamics of wealth and income ineguality throughout the last two centuries, and offers a somewhat grim picture of the future of economic ineguality. Along the way, Piketty also offers his the ory of the cause of exploding executive pay and how we can successfully combat this destructive trend.''

''The blockbuster economics book of the season, Thomas Piketty's Capital in the Twenty-First Century, argues that the great egualizing decades following World War 2, which brought on the rise of the middle class in the United States, were but a historical anomaly.''