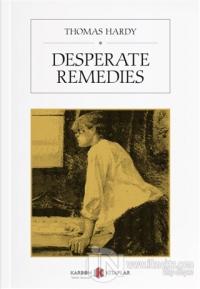 Desperate Remedies(1871) was Thomas Hardy's first published novel, following an earlier manuscript which failed to find a publisher and was later destroyed.

In fact, Hardy had a greater ambition than writing a sensation novel. He attempted to show his protagonists not as stock characters typical of sensation novels, but as elemental men and women living in a post-Darwinian universe. Their conduct is determined rather by their instinct than reason and social convention. InDesperate RemediesHardy showed that that the biological aspect of life predetermines human actions. He introduced one of his favourite themes the dichotomy between 'flesh and spirit' and became the first Victorian novelist to deal frankly with human sexuality and the unconscious.