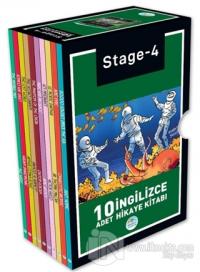 20.000 Leagues Under the Sea (64 Sayfa)
Professor Aronnax, his faithful servant, Conseil, and the harpooner, Ned Land, begin an extremely dangerous voyage to rid the seas of a little-known and terrifying sea monster.

Jane Eyre (56 Sayfa)
Jane Eyre has dazzled generations of readers with its depiction of a womans quest for freedom. Having grown up an orphan in the home of her cruel aunt and at a harsh charity school, Jane Eyre becomes an independent and spirited survivor-qualities that serve her well as governess at Thornfield Hall.

Le Morte d'Arthur (48 Sayfa)
First published in 1485, Thomas Malory's Le Morte d'Arthur or The Death of Arthur collects together many of the known legends of King Arthur into one creative text. Beginning with his birth, Le Morte d'Arthur relates Arthur's rise to become the King of England and leader of the Knights of the Round Table.

Les Mıserables (70 Sayfa)
Les Miserables tells the story of ex-convict, Jean Valjean, and his valiant struggle to redeem his past. A potent social document of the poverty, ignorance, and brutality of man, Les Miserables is also a rousing adventure story. Victor Hugo reached the peak of his powers in this far-reaching novel of nineteenth-century France.

Prıde and Prejudıce (64 Sayfa)
Pride and Prejudice tells the story of Mr. and Mrs. Bennets five unmarried daughters after the rich and eligible Mr. Bingley and his status-conscious friend, Mr. Darcy, have moved into their neighbourhood.

Romeo and Juliet (56 Sayfa)
When the feud between the Montagues and Capulets spills into the streets of Verona, a great love must be kept secret—that of Romeo, son of Montague, and Juliet, daughter of the sworn enemy. But only a tragic twist of fate can promise peace.

The Invısıble Man (62 Sayfa)
The Invisible Man tells the story of Griffin, a brilliant and obsessed scientist dedicated to achieving invisibility. Taking whatever action is necessary to keep his incredible discovery safe, he terrorises the local village where he has sought refuge.

The Lost World (58 Sayfa)
Its London, 1907. Journalist Edward Malone, rejected by the woman he loves because he is too prosaic, decides to go in search of adventure and fame to prove himself worthy of her.

The Phantom of the Opera (52 Sayfa)
Rumors abound that a ghost stalks the dark passages and cellars of the Paris Opera House. No one has actually seen this Phantom, but Christine Daaé, a beautiful and talented young singer, has heard his voice. He is her Angel of Music, coaching her to sing as she never could before. When the handsome Viscount begins to court Christine, the mysterious Phantom-consumed by jealousy-rises up to seek revenge.

The Secret Garden (60 Sayfa)
Nobody loves Mary - the heroine of the famous story of Francis Burnett The Secret Garden. However, she does not burn with love for others, and moreover she can not stand the whole world.