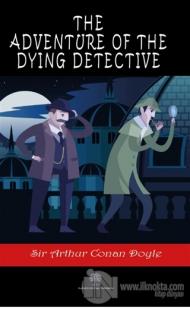 The Adventure of the Dying Detective
Sir Arthur Conan Doyle

https://www.ilknokta.com/sir-arthur-conan-doyle/the-adventure-of-the-dying-detective.htm
The Adventure of the Dying Detective
Platanus Publishing
27.00

Mrs. Hudson, t Hudson, the landlady of Sherlock Hol­mes, was a long-suffering woman. Not only was her first-floor flat invaded at all hours by throngs of sin­gular and often undesirable characters but her remar­kable lodger showed an eccentricity and irregularity in his life which must have sorely tried her patience. His incredible untidiness, his addiction to music at strange hours, his occasional revolver practice within doors, his weird and often malodorous scientific ex­periments, and the atmosphere of violence and dan-ger which hung around him made him the very worst tenant in London. On the other hand, his payments were princely. I have no doubt that the house might have been purchased at the price which Holmes paid for his rooms during the years that I was with him.