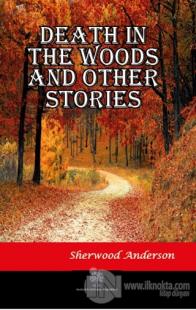 Death in the Woods and Other Stories
Sherwood Anderson

https://www.ilknokta.com/sherwood-anderson/death-in-the-woods-and-other-stories-1.htm
Death in the Woods and Other Stories
Platanus Publishing
52.00

“She married Jake and had a son and daughter, but the daughter died. Then she settled down to feed stock. That was her job. At the German's place she had cooked the food for the German and his wife. The wife was a strong woman with big hips and worked most of the time in the fields with her husband. She fed them and fed the cows in the barn, fed the pigs, the horses and the chickens. Every moment of every day, as a young girl, was spent feeding something.

Then she married Jake Grimes and he had to be fed. She was a slight thing, and when she had been married for three or four years, and after the two children were born, her slender shoulders became stooped.

Jake always had a lot of big dogs around the house, that stood near the unused sawmill near the creek. He was always trading horses when he wasn't stealing something and had a lot of poor bony ones about. Also he kept three or four pigs and a cow. They were all pastured in the few acres left of the Grimes place and Jake did little enough workg.”