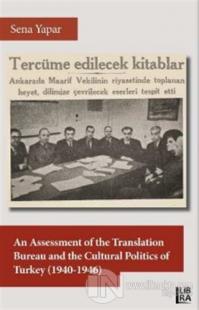 https://www.ilknokta.com/sena-yapar/an-assessment-of-the-translation-bureau-and-the-cultural-politics-of-turkey-1940-1946.htm
An Assessment of the Translation Bureau and the Cultural Politics of Turkey (1940-1946)
Libra Yayınları
150.00

In this book, the cultural politics of the period is tried to be investigated through the activities of the Translation Bureau between 1940 and 1946. Hasan-Âli Yücel was appointed as the Minister of Culture in the government formed just after Atatürk's passing away. This change directly pointed out a significant shift in the cultural politics of the country and the ideological framework of this politics was identified as the Turkish humanism.

According to this approach, severing all ties with the authentic culture belonged to the post-Islamic era and constructing modern Turkish identity based on Western humanism consisting of Greek and Latin works was aimed. The translation movement functioned as a channel which bridged the political and literary fields in this period. A cultural transfer was expected through Western classical works translated by the Translation Bureau.

Additionally, these works were put at the centre of the national literary system as canonical works. This study focused on the various writings and speeches of Yücel, who kept his position as a Minister of Culture/National Education for the longest time during the all-Republican era, and several studies regarding him. The main argument of this work is that the ideology of Turkish humanism, which framed the cultural politics implemented during Yücel's ministry, was a kind of Westernist nationalism that was future-oriented rather than being focused on the past.