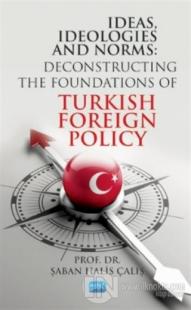 Despite its standing in world politics, there is still a paucity of academic publications concerning Turkish foreign policy. In addition, most of the existing publications prefer only to narrate it historically.

This book takes a step back and critically analyses the factors and actors which affect Turkish foreign policy within a theoretical and conceptual framework as well as a historical setting covering the Kemalist period in particular. In addition, this book presents its subject matter from a broader and longer perspective, taking together both material and ideational phenomena, all the while focussing on the ideas, ideologies and norms which are ignored by many analysts of Turkish politics.

Turkish foreign policy of the past and even up to the present appears to be a product of certain “foundations” that were laid down by the Kemalist leadership and cadres after the establishment of the Turkish Republic. However, this book reviews these foundations comparatively with the Ottoman modernisation period including as well certain detailed references to the classical age of the Empire in order to demonstrate that there are not so much epistemological ruptures between past and present in a broader sense.