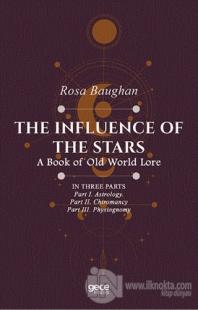 The Influence of the Stars

https://www.ilknokta.com/rosa-baughan/the-influence-of-the-stars.htm
The Influence of the Stars A Book of Old World Lore
Gece Kitaplığı
21.00

“...The Moon, being of all the heavenly bodies the nearest to earth, has also much influence, and things animate and inanimate sympathise and vary with her. By her changes rivers swell or are reduced, the tides of the sea are ruled by her risings and settings, and animals and plants are influenced as she waxes or wanes. The stars also produce in the ambientmany impressions, causing heats, winds and storms, to the influence of which earthly things are subjected. The force of the Sun, however, predominates, because it is more generally distributed; the others either co-operate with his power or diminish its effects. The Moon more frequently does this at her first and last quarter; the stars act also in the same way, but at longer intervals and more obscurely than the Moon. From this it follows that not only all bodies which may be already in existence are subjected to the motion of the stars, but also that the impregnation and growth of the seeds from which all bodies proceed are moulded by the quality in the ambient at the time of such impregnation and growth...”