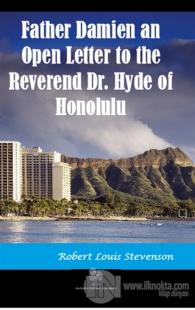 “Your sect (and remember, as far as any sect avows me, it is mine) has not done ill in a worldly sense in the Hawaiian Kingdom. When calamity befell their innocent parishioners, when leprosy descended and took root in the Eight Islands, a quid pro quo was to be looked for. To that prosperous mission, and to you, as one of its adornments, God had sent at last an opportunity. I know I am touching here upon a nerve acutely sensitive.

I know that others of your colleagues look back on the inertia of your Church, and the intrusive and decisive heroism of Damien, with something almost to be called remorse. I am sure it is so with yourself; I am persuaded your letter was inspired by a certain envy, not essentially ignoble, and the one human trait to be espied in that performance. You were thinking of the lost chance, the past day; of that which should have been conceived and was not; of the service due and not rendered.”