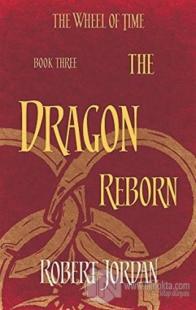 https://www.ilknokta.com/robert-jordan/the-dragon-reborn.htm
The Dragon Reborn (Book 3 of the Wheel of Time (soon to be a major TV series)
Orbit
200.00

Soon to be a major Amazon Prime TV series

The third novel in the Wheel of Time series - one of the most influential and popular fantasy epics ever published.

The Shadow lies across the Pattern of the Age, and the Dark One has turned all his power against the prison that binds him. If it fails he will escape and nothing will stand in the storm that blows then . . . save the man that was born to battle the darkness: Rand al'Thor, the Dragon Reborn.

But to wage his war Rand must find Callandor, ancient Sword of the Dragon . . . and the Forsaken will shatter the world to thwart him.

'Epic in every sense' Sunday Times

'With the Wheel of Time, Jordan has come to dominate the world that Tolkien began to reveal' New York Times