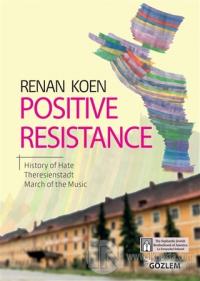 The book you are holding; explains in detail the stories of survivors, who lived so long as to convey the history of hatred, which includes the continuum from thousands of years ago to the end of World War II, how they survived with resistance despite the brutality they experienced, and the life in the Theresienstadt Ghetto and Concentration Camp, where mainly the artists were imprisoned.

In this book, you will read about the reality of how an example of hate started and developed, with what distortions it turned into violence, and finally turned into a morbid act and systematically realized the design of killing, like the Holocaust, and then its denial and distortion. You will witness the historical documents that Turkish Jews born in Istanbul and Edirne, who migrated to Europe and were imprisoned in Theresienstadt, despite being documented as Muslims in their identifications, experienced the Holocaust.

The musical works and poems getting off the ground in all this cruelty and 20 music criticisms that the composer and music critic Viktor Ullmann wrote in Theresienstadt come to light for the first time in this book collectively.

In the light of the concept of Positive Resistance, which composers put forward for the first time as a result of deciphering the works they composed in this camp with the passionate research of pianist, composer, music therapist Renan Koen and the “Positive Resistance method” that she created for the permanent individual and social peace; “Never again!” regardless of religion, language or race; with the “Holocaust Reality through Positive Resistance” training that Koen currently carries with young people, the “March of the Music” student movement, which the young people, in the end, produce in line with their abilities, and the students' self-expressions, this book appeals to a wide range of audience.

“We are no longer in the hunter-gatherer era, we have developed, humanity has gone through many stages. There are threats out there, we no longer have to live with behavioral patterns such as they are bad, we are good. We are not captives of these things. We now have the freedom to choose. We are free. We have the freedom to enjoy and appreciate differences and diversity. In doing so, we have the freedom to honor the colors within ourselves. My way of declaring freedom is the Self's flowing into life Lush'ly so be it.” Renan Koen