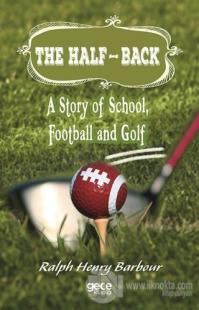 The Half-Back: A Story of School, Football and Golf
Ralph Henry Barbour

https://www.ilknokta.com/ralph-henry-barbour/the-half-back-a-story-of-school-football-and-golf.htm
The Half-Back: A Story of School, Football and Golf
Gece Kitaplığı
26.89

The speakers were lying on the turf back of the north goal on the campus at Hillton Academy. The elder and larger of the two was a rather coarse-looking youth of seventeen. His name was Bartlett Cloud, shortened by his acquaintances to “Bart” for the sake of that brevity beloved of the schoolboy. His companion, Wallace Clausen, was a handsome though rather frail-looking boy, a year his junior. The two were roommates and friends.

The subject of their derisive remarks, although standing but a scant distance away, apparently heard none of them.

“Hi, West!” shouted Bartlett Cloud as a youth, attired in a finely fitting golf costume, and swinging a brassie, approached. The newcomer hesitated, then joined the two friends.

“Hello! you fellows. What's up? Thought it was golf, from the crowd over here.” He stretched himself beside them on the grass.

“Golf!” answered Bartlett Cloud contemptuously. “I don't believe you ever think of anything except golf, Out! Do you ever wake up in the middle of the night trying to drive the pillow out of the window with a bed-slat?”