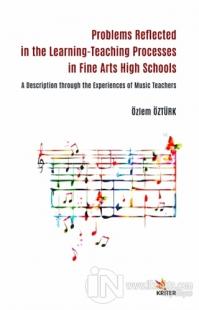 A Description through the Experiences of Music Teachers
Özlem Öztürk

https://www.ilknokta.com/ozlem-ozturk/problems-reflected-in-the-learning-teaching-processes-in-fine-arts-high-schools.htm
Problems Reflected in the Learning-Teaching Processes in Fine Arts High Schools A Description through the Experiences of Music Teachers
Kriter Yayınları
25.00

The book, which started its journey as a research article but later turned into a book, examines the educational problems experienced in the Music Departments of Fine Arts High Schools in Turkey through the views of the music teachers working in this school in a provincial city and discusses the results with a generalizable approach, mainly from the perspective of music teaching. Although Fine Arts High Schools have been extensively studied in the music education literature, studies focused on the problems experienced in these schools are quite limited. The data of the study were obtained from a single study group instead of a sample selected from the population. Some problems are strongly related to the socio-cultural and socio-economic variables surrounding the school. These two justifications should be interpreted as the results are not generalizable. However, it should be emphasized that some of the results obtained in this study regarding common and non-intervening elements for all Fine Arts High Schools in Turkey such as the criteria for appointment of administrators, teacher-student selection method, curriculums, and textbooks may be generalizable. In this context, the study is considered important in terms of drawing attention to the current problems experienced in these schools and providing results that will help to make a comparison between the school where the research was conducted and other Fine Arts High Schools.