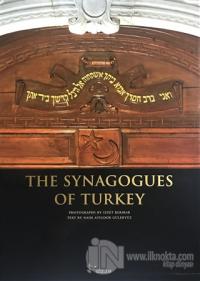 The album book "Synagogues of Turkey" in which the photographs belong to the famous artist Izzet Keribar, the texts are written by researcher Naim A. Guleryuz, and the concept was implemented by Joelle Imamoglu is published by Gozlem Bookstore.

The book's framework incorporates a 'promenade course'. "Synagogues of Istanbul", covering the areas from Balat to the shores of Marmara and the Princess Islands, the two banks of the Bosphorus on each side, and the neighborhoods of Shishli-Beyoglu-Galata and Haskoy-Kemerburgaz constitutes the first volume and "Synagogues of Thrace-Anatolia", covering the areas starting with Edirne throughout Thrace, the shores of the Aegean and the Mediterranean, southeast Anatolia and the cities of Ankara and Bursa, constitutes the second volume.

"Synagogues of Turkey" which we believe will represent 'the Turkish-Jewish Heritage' in the best possible way was published on special paper, utilizing the most modern technology, in both Turkish and English.