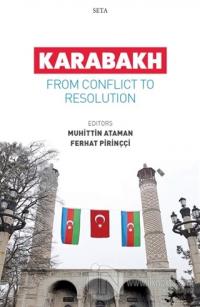 On September 27, 2020, regional clashes erupted following a provocative Armenian attack on the front line, leading to a reemergence of the dragged-out Karabakh conflict onto the world agenda. When the clashes first started, few could have guessed that this period would be known as the “Second Karabakh War” and that it would lead to key outcomes in a short time span. With the influence of various factors on the war, especially Turkey's support, Azerbaijan liberated an important segment of its occupied lands, dealing a clear defeat to Armenia. This war is an important turning point in terms of reversing the status quo which had been attempted to be imposed on Azerbaijan for nearly 30 years. The status quo demonstrated that the Karabakh onflict, and hence Armenia's occupation of Azerbaijani territories, was unsustainable. The current book conducts a comprehensive analysis of the Karabakh conflict, with contributions from field-expert academics and specialists from Azerbaijan and Turkey. While doing so, it addresses the significance of the Karabakh conflict, its historical background, the Second Karabakh War, and the Karabakh policies of thirdparty actors from a broad perspective.