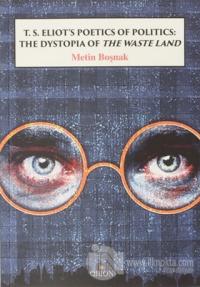 T.S. Eliot's Poetics of Politics: The Dystopia of the Waste Land
Metin Boşnak

Eliot's The Waste land is a contemporary dystopia interlinked with a plethora of dystopian works that have proliferated, especially in the last two centuries. This study attemmpting to consider The Waste Land in the dystopian paradigm is a new approach to an old theme. The subversive paradigm is precisely how 'the Waste Land's dystopian potics operates, subverting its so-called "sources," mostly anthropological ones such as J. Weston's From Ritual to Romance and J. G. Frazer's The Golden Bough (1920), and almost parodying them. Dystopian works have emerged as a reaction to or counter-attack on utopios.

'The words,'Shantih shantih shantih (433)" close The Waste Land and come out like an 'amen" to a Christian's prayers. The"amen refers onay to the wish that the prayers should be accepted: it does not guarantee that the wish will be granted or that salvation will be realized. Consequently, Eliot's dystopic The Waste Land does not lead nı salvation. and the suggested means for salvation totally lack in the here and the now.

Metin Boşnak is a published poet, essayist, and scholar of Comparative Literature and American Studies at Istanbul Sabahattin Zaim University.