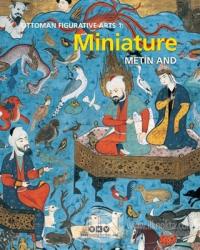 For over fifty years, Metin And championed Turkish theatre, traditional performing arts, festivities and the art of Ottoman miniature in dozens of articles and ten titles in Turkish and other languages. The list ends with Ottoman Figurative Arts I: Miniature, which attests to And's fascination with the subject.

A fundamental “art of the book” as well as a courtly art form, miniature favoured a highly realistic depiction of daily life, human beings, the urban fabric and buildings an aspect promoted widely in And's work. Miniature's main function was illustrating manuscripts. As Ottoman Figurative Arts I: Miniature ably demonstrates, the target audience was either the sultan, or high-ranking statesmen. Manuscripts so illustrated were prohibitively costly works of art, safeguarded in the Treasury, and any illustrated manuscript captured in battle would have delighted the victorious commander and sultan equally.

An indispensable reference book, the lavishly illustrated Ottoman Figurative Arts I: Miniature covers the stages in the development of the art in the Ottoman Empire, an overview of the studios, techniques and methods of this courtly art, and includes a splendid Album of portraits, lives of the sultans, the palace, festivals, literary works, religious topics, landscapes and townscapes, scientific and encyclopaedic subjects, the world of birds, animals and fantastic creatures as well as women and men.