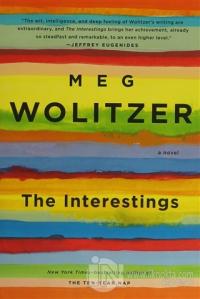 "Like Virginia Woolf in The Waves, Meg Wolitzergives us the full picture here, charting her characters' lives from the self-dramatizing of adolescence, through the resignation of middle age to, to the attainment of a wisdom that holds all the intensities of life in a single, sustained chord, much like this book itself. The wit, intelligence, and deep feeling of Wolitzer's writing are extraordinary, and The Interestings brings her achievement, already so steadfast and remarkable, to an even higher level."

"At this point in the career, Meg Wolitzer deserves to be a household name."

"Wolitzer is as precise and rigorous an observer of social statuas as Tom Wolfe; she is as incisive and pitiless and clear-eyed a chronicler of female-male tandems as Philip Roth or John Updike... She writes about life at eye level... Wolitzer is terrific at depicting the ambiguity of modern family life, its murky moral choices and thorny dilemmas."

"All of Wolitzer's characters are so articulate and insightful that it's a pleasure to listen to them think... (Her) scenes are intensely observed and nuanced."

"Holds a mirror up to modern America, offering a shock of recognition amid the laughter."