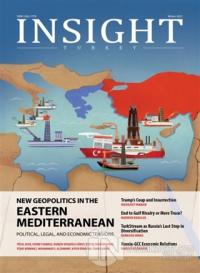 A New Issue of Insight Turkey Has Been Published!

The new issue of Insight Turkey highlights different affairs regarding the Eastern Mediterranean region. A number of leading and well-known intellectuals and academicians have contributed to this issue focusing on political, legal, and energy dimensions of maritime tensions and the rise of new geopolitics in the region.

Sohbet Karbuz gives an overview of the key commercial, technical, legal, and political challenges the East Mediterranean gas faces and proposes possible ways to overcome them. From a Legal perspective, Ayfer Erdoğan's research article examines the disputes by analyzing the standpoints of the main actor's in the region. Meanwhile, with reference to international law, the commentary written by Sertaç Hami Başeren reviews their justifications, with a particular focus on Turkey's actions. Furthermore, Yücel Acer argues that Turkey has developed a comprehensive legal approach as to maritime delimitation in the region.

In addition, while Nurşin Ateşoğlu Güney and Vişne Korkmaz's research article explores the projected impact of the U.S.-initiated Abraham Accords on regional geopolitics, Muhammad Soliman Alzawawy's commentary aims to forecast the route and different scenarios that the new American President Joe Biden will take in his foreign policy towards the Eastern Mediterranean. Finally, Galip Emre Yıldırım argues that France's identification of Turkey as an ‘external enemy' reflects the former's political and economic concerns about the Mediterranean gas reserves.

Along with these seven pieces focusing on the Eastern Mediterranean, there are some constructive pieces on a range of topics covering different issues relating to Turkey, Russia, the Gulf, and international politics where Inderjeet Parmar, Marwan Kabalan, Nikolay Kozhanov, and Ramazan Erdağ have enriched our issue with their valuable contributions.

We trust that our readers will find this issue of Insight Turkey informative and insightful!