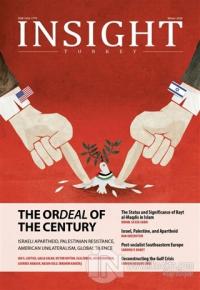 A New Issue of Insight Turkey entitled as “The Ordeal of the Century” Has Been Released!

In its first issue in 2020, Insight Turkey, one of the leading academic journals in Turkey, aims to bring to its readers a comprehensive framework on the current situation of the Israeli-Palestinian question and whether there will be a deal to this problem or not. Therefore, this issue, entitled as “The Ordeal of the Century,” with the contribution of leading experts in this area, highlights different subjects regarding the Israeli-Palestinian issue, while focusing on different perspectives and dimensions of the problem.

In the commentaries section of the journal, Ikrime Sa'eed Sabri, the Imam of al-Aqsa Mosque, explains the significance of Bayt al-Maqdis through underlining what links Muslims to Bayt al Maqdis and the land of Palestine.

While Galia Golan addresses the obstacles between Israel and Palestine as well as the possibilities for peace, Victor Kattan examines the illegal Israeli settlements and occupations in the West Bank. Moreover, Ian Lustick focuses on the two-state solution to the Israeli-Palestinian conflict through underlining the nature of negotiations between both sides.

Among research articles, Ran Greenstein analyzes the policies practiced by Israel which are identified as an “apartheid of a special type” and as a crime against humanity.

Meanwhile, Elia Zureik highlights the Israeli practices of governance in Palestine where the Zionist movement and later the Israeli state have worked to kill the dream of an independent Palestinian state.In addition to these articles, there are some insightful pieces on a range of topics such as the contribution of Turkish Maarif Foundation to internationalization of education, the current problems dominating the Balkan region and the Gulf crisis.

We hope that this issue will be gripping and informative for our readers!