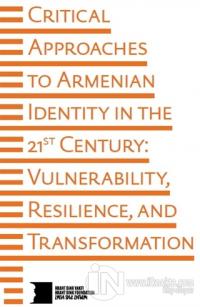 Critical Approaches to Armenian Identity in the 21st Century
Kolektif

At a time when our identities are becoming less firmly fixed and more fluid, the idea of a single absolute identity is giving way to the idea that identities that can be shaped by time, space and the individual.

As such, traditional approaches to Armenian identity are also being re-examined, and the issue is beingExplored from new perspectives and through interdisciplinary research.

This book includes a selection of conference presentations that cover diverse topics including the historical background upon which a shared Armenian identity was constructed; the temporal and spatial aspects of Armenian identities; the influence of factors such as class, religion, gender and age on the formation of identity; the importance of Armenian institutions such as the church, political parties, schools and museums as well as the Armenian state in the issue of identity; the use of art, literature, language and aesthetics in the development, change and expression of the Armenian identity. Denial, inclusion and exclusion for communities in Turkey and the diaspora. In covering such a broad range of issues, this book will offer a contribution to the many discussions around the concept of identity.