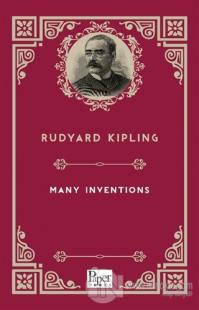 Many Inventions is a collection of short stories by Rudyard Kipling. Twelve of the 14 stories appeared previously in various publications, including The Atlantic Monthly and the Strand Magazine.

The title refers to a verse from Ecclesiastes, which is quoted on the title page: “Lo, this only have I found, that God hath made man upright; but they have sought out many inventions.” (Ecclesiastes 7:29)

The fourteen stories are preceded by a poem, “To the True Romance”, and followed by another poem, “Anchor Song”.

The Disturber of Traffic, A Conference of the Powers, My Lord the Elephant, One View of the Question, ‘The Finest Story in the World', His Private Honour, A Matter of Fact, The Lost Legion, In the Rukh, ‘Brugglesmith', ‘Love-o'-Women', The Record of Badalia Herodsfoot, Judson and the Empire, The Children of the Zodiac