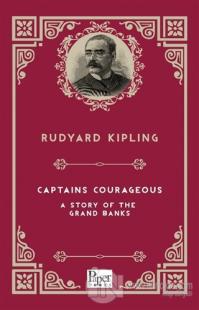 A Story of the Grand Banks
Joseph Rudyard Kipling

Captains Courageous is an 1897 novel, by Rudyard Kipling, that follows the adventures of fifteen-year-old Harvey Cheyne Jr., the spoiled son of a railroad tycoon, after he is saved from drowning by a Portuguese fisherman in the north Atlantic. The novel originally appeared as a serialisation in McClure's, beginning with the November 1896 edition with the last instalment appearing in May 1897. In that year it was then published in its entirety as a novel, first in the United States by Doubleday, and a month later in the United Kingdom by Macmillan. It is Kipling's only novel set entirely in North America. In 1900, Teddy Roosevelt extolled the book in his essay “What We Can Expect of the American Boy,” praising Kipling for describing “in the liveliest way just what a boy should be and do.”

The book's title comes from the ballad “Mary Ambree”, which starts, “When captains courageous, whom death could not daunt”. Kipling had previously used the same title for an article on businessmen as the new adventurers, published in The Times of 23 November 1892.