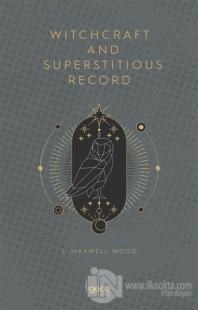 “...In approaching the whole matter for descriptive purposes, the traditional, or as it may perhaps be fittingly termed, the “ideal” form of witchcraft, falls naturally first to be considered, and here the existence of a secret society or unholy order of witches and warlocks meeting together at certain appointed times, figures as an outstanding feature, qualification to belong to which, confessed rare powers of affinity with the powers of evil and darkness. The more these witches and warlocks were feared in their ordinary guise as human mortals by the country-side or district to which they belonged, the higher the rank accorded to them in secret conclave, and the special notoriety of having been branded or “scored,” at the hands of an angry populace, with the sign of the cross on the forehead, carried with it special recognition of itself. Reputed gatherings or witch-festivals were celebrated periodically, the most important and outstanding taking place at Hallowmass, and such eerie places of meeting as the lonely ruins of Sweetheart Abbey and Caerlaverock Castle, were the appropriate scenes of their midnight rites and revels; but most of all in this south-western district was it to the rising slope of Locharbriggs Hill, not many miles from Dumfries, that the “hellish legion” repaired...”