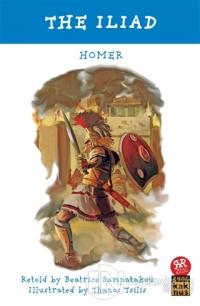 “A competition for a golden apple and two lovers; I'm amazed how such small things can have such massive results.”

It is the ninth year of the siege of Troy by the Greeks. Will the fighting go on for ever?

Achilles, the greatest of Greek heroes, is angered by Agamemnon and decides to withdraw from the battle. What is the reason for his wrath? Is there anything that will make him change his mind and return to the battlefield?

Both armies have suffered tremendous losses, and the long war seems to be heading towards a stalemate. The Greeks, however, have an ingenious stratagem that may well determine the outcome of the war.

Brave warriors, noble heroes, women of divine beauty and envious gods moved by human passions come alive in this wonderful retelling of the most famous epic war story of all time.