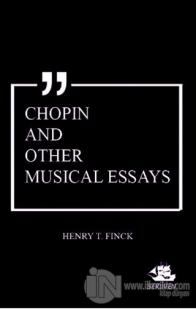 The chief reason, however, why musical authorities have so long hesitated to acknowledge that Chopin is one of the very greatest explorers and pioneers in the domain of their art, is to be found in what, for want of a better term, may be called æsthetic Jumboism. When the late lamented Jumbo was in New York he attracted so much attention that his colleagues, although but little inferior in size, had "no show" whatever. Everybody crowded around Jumbo, stuffing him with bushels of oranges and apples, while the other elephants were entirely ignored. As elephants are intelligent animals, is it not probable that Pilot, the next in size to Jumbo, went mad and had to be shot because he was jealous of the exclusive attentions bestowed on his rival? In æsthetics, this Jumboism, this exaggerated desire for mammoth dimensions, seems to be a trait of the human mind which it is difficult to eradicate. It is a suggestive fact that the morbid, sham æstheticism which prevailed in England a few years ago, chose for its symbol the uncouth sunflower. And many who know that a sunflower is less beautiful [7]and fragrant than a violet, will nevertheless, on visiting a picture gallery, give most of their attention to the large canvases, though the smaller ones may be infinitely more beautiful. It cannot be said that the critics of art or literature follow the popular disposition to measure genius with a yard-stick; but in music there seems to be a general tendency to do this. Liszt remarks, apropos, in his work on Chopin: "The value of the sketches made by Chopin's extremely delicate pencil has not yet been acknowledged and emphasized sufficiently. It has become customary in our days to regard as great composers only those who have written at least half a dozen operas, as many oratorios, and several symphonies