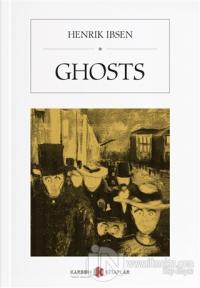 Ghosts, a drama in three acts by Henrik Ibsen, published in 1881 in Norwegian as Gengangere and performed the following year. The play is an attack on conventional mo­rality and on the results of hypocrisy.

Ostensibly a discussion of congenital venereal disease, Ghosts also deals with the power of ingrained moral con­tamination to undermine the most determined idealism. Although the lecherous Captain Alving is in his grave, his ghost will not be laid to rest. The memorial that Helen, his conventionally minded widow, has erected to his memory burns down even as his son Oswald goes insane from in­herited syphilis and his illegitimate daughter slips inexo­rably toward her destiny in a brothel.