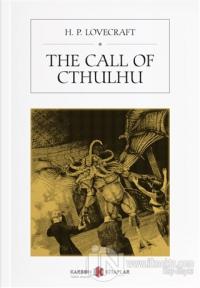 The Call of Cthulhu
Karbon Kitaplar
16.00

First published in 1928, in Weird Tales magazine, this launched what is now known as the Cthulhu Mythos. It was here, as much as his earlier unspeakable horrors like Dagon and The Tomb and The Nameless City, that formed what is today known as Lovecraftian; but it was great Cthulhu that gave this sub-genre it's definition and a face from which to leer down upon poor, lost humanity.