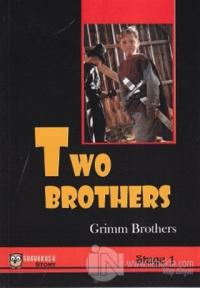 There were once upon a time two brothers, one rich and the other poor. The rich one was goldsmith and evil-hearted. The poor one supported himself by making brooms, and was good and honorable. The poor one had two children, who were twin brothers and as like each other as two drops of water. The two boys went in and out of the rich house, and often got some of the scraps to eat.

It happened once when the poor man was going into the forest to fetch brush-wood. That he saw a bird which was quite golden and more beautiful than any he had ever chanced to meet with. He picked up a small stone, threw it at it, and was lucky enough to hit it, but one golden feather only fell down, and carried it to his brother, who looked at it and said: It is pure gold. And gave him a great deal of money for it.

Next day the man climbed into a birch-tree, and was about to cut off a couple of branches when the same bird flew out, and when the man searched he found a nest, and an egg lay inside it, which was of gold. He took the egg home with him, and carried it to his brother, who again said: It is pure gold, and gave him what it was worth.