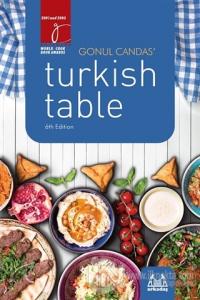 Gonul Candas' Turkish Table, which is one of the bestselling cookbooks in Turkey, has proven its competence in the tables of three generations, from grandmother to granddaughter, with more than 400 recipes that it contains. The book involving the most popular tastes of Turkish and world cuisine has received the “Best Chef Book in Turkish” category in the international cookbooks contest, Gourmand World Book Awards, in 2003. It has also received the “Best Chef Book in Turkish” reward in the World Cookbook Fair held in 2001.

The recipes in Gonul Candas' Turkish Table have been selected and arranged by taking into consideration such criteria as nutritional value, affordability, practicality and taste. You can conquer the hearts of your loved ones by applying these tried recipes and get more successful results than ever before.

You can bring the delicious examples of Turkish and world cuisine to your table with Gonul Candas' Turkish Table.