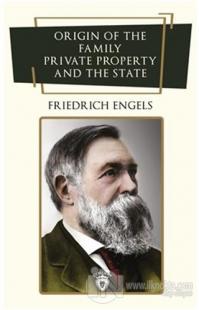 Origin Of The Family, Private Property And The State
Friedrich Engels

https://www.ilknokta.com/friedrich-engels/origin-of-the-family-private-property-and-the-state.htm
Origin Of The Family, Private Property And The State
Dorlion Yayınevi
25.00

Friedrich Engels (28 November 1820 – 5 August 1895), was a German philosopher, historian, political scientist and revolutionary socialist. He was also a businessman, journalist and political activist, whose father was an owner of large textile factories in Salford (Greater Manchester, England) and Barmen, Prussia (now Wuppertal, Germany).
Engels developed what is now known as Marxism together with Karl Marx. In 1845, he published The Condition of the Working Class in England, based on personal observations and research in English cities. In 1848, Engels co-authored The Communist Manifesto with Marx and also authored and co-authored (primarily with Marx) many other works. Later, Engels supported Marx financially, allowing him to do research and write Das Kapital. After Marx's death, Engels edited the second and third volumes of Das Kapital. Additionally, Engels organised Marx's notes on the Theories of Surplus Value which were later published as the "fourth volume" of Das Kapital.[6][7] In 1884, he published The Origin of the Family, Private Property and the State on the basis of Marx's ethnographic research.

On 5 August 1895, aged 74, Engels died of laryngeal cancer in London. Following cremation, his ashes were scattered off Beachy Head, near Eastbourne.