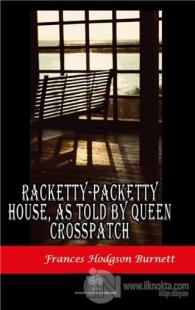 “Racketty-Packetty House was in a corner of Cynthia's nursery. And it was not in the best corner either. It was in the corner behind the door, and that was not at all a fashionable neighborhood. Racketty-Packetty House had been pushed there to be out of the way when Tidy Castle was brought in, on Cynthia's birthday. As soon as she saw Tidy Castle Cynthia did not care for Racketty- Packetty House and indeed was quite ashamed of it. She thought the corner behind the door quite good enough for such a shabby old dolls' house, when there was the beautiful big new one built like a castle and furnished with the most elegant chairs and tables and carpets and curtains and ornaments and pictures and beds and baths and lamps and book-cases, and with a knocker on the front door, and a stable with a pony cart in it at the back. The minute she saw it she called out.”