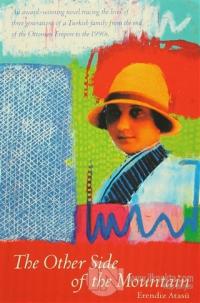 https://www.ilknokta.com/erendiz-atasu/the-other-side-of-the-mountain.htm
The Other Side of the Mountain
Milet Yayınları
32.20

Winner of Turkey's most prestigious literary prize, The Other Side of the Mountain traces the lives of three generations of a Turkish family, from the end of the Ottoman Empire to the 1990s. Running through the novel, like a tributary to its source, is a daughter's journey back to her mother's student days at Cambridge and later struggles to find a place in Atatürk's new social order.

'This is a bold and poignant novel, a powerful evocation not only of Turkish history through the twentieth century, but also of world history and of the interweaving of nationalism and ideology. The sentimental. The blending of the personal and the documentary is superbly handled. This is a remarkable and important novel.'

'Literature ascends to great heights when a novelist portrays the spirit and history of a nation with such unforgettable characters that the reader feels a native of that country. The Other Side of the Mountain masterfully provides that universal appeal. Erendiz Atasüi presents us with the soul of Turkey. This is an outstanding achievement.'