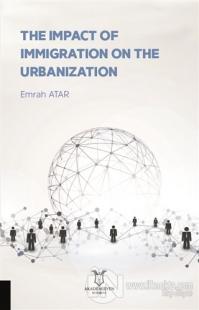 The Impact Of Immigration On The Urbanization
Emrah Atar

https://www.ilknokta.com/emrah-atar/the-impact-of-immigration-on-the-urbanization.htm
The Impact Of Immigration On The Urbanization
Akademisyen Kitabevi
50.00

Since 2011, the world is confronted with one of the largest refugee crises, the Syrian refugee crisis. The Syrian refugee crisis has become one of the biggest tragedies and attracts everyone's attention worldwide. The civil war and terror in Syria have led to millions of people leave their country and migrate to other countries. Many Syrian immigrants prefer to move to Turkey, where they feel as a second homeland. While some of these people live in camps, most of them have been spread and settled in cities in Turkey. This study aims to identify the characteristics of Syrian refugees in Turkey as they relate to urbanization.

The first concept of this study is given brief information about urbanization and its related concepts. One of the reasons for urbanization is internal and external migration. In this context, the general situation of the refugees, who had to leave their country because of the civil war to move to Turkey just for safety and a better life, is reviewed in this study. Furthermore, in this study, the reasons why people had to migrate, why they prefer Turkey, the debates about the legal status of refugees in Turkey, the effects of refugees on Turkey and the challenges of the refugees in Turkey are generally discussed. The appropriateness of the border cities in Turkey for the refugees is usually argued, it is then discussed which cities are suitable for Syrian refugees. In the last part, an analysis of the burden-sharing of refugee crisis problem is examined in the case of relations between Turkey and United Nations, European Unions or other countries.