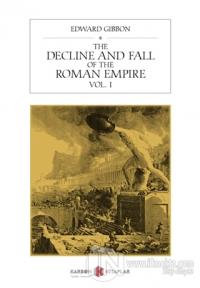 The Decline and Fall of the Roman Empire Vol. 1
Edward Gibbon

https://www.ilknokta.com/edward-gibbon/the-decline-and-fall-of-the-roman-empire-vol-1.htm
The Decline and Fall of the Roman Empire Vol. 1
Karbon Kitaplar
62.00

"It was at Rome, on the 15th of October 1764, as I sat musing amid the ruins of the capitol, while the barefooted friars were singing vespers in the temple of Jupiter, that the idea of writing the decline and fall of the city first started to my mind,' recorded Edward Gibbon with characteristic exactitude. Over a period of some twenty years, the luminous 18th century historian a precise, dapper, idiosyncratic little gentleman famous for rapping his snuff-box–devoted his considerable genius to writing an epic chronicle of the entire Roman Empire's decline. His single flash of inspiration produced what is arguably the greatest historical work in any language–and surely the most magnificent narrative history ever written in English. ‘Gibbon is one of those few who hold as high a place in the history of literature as in the roll of great historians," noted Professor J.B. Bury, his most celebrated editor.