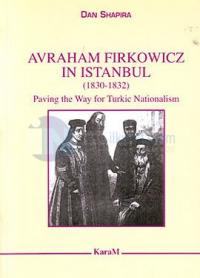 https://www.ilknokta.com/dan-shapira/avraham-firkowicz-in-istanbul.htm
Avraham Firkowicz in İstanbul
KaraM Araştırma ve Yayıncılık
8.00
Awraham Firkowicz was a Turkic - speaking Karaite Jew from what is now Western Ukraine, who spent much of his life in extensive travels, during which he obsessively looked for ancient Jewish manuscripts. The academic world owes to his picturesque man three most important collections of Jewish manuscripts ever collected by a single man. During his short stay in İstanbul in the Tanzimat period produced there several important Karaite books in Turkish, and his activities in the Ottoman capital paved, in many senses, the way for far -going transformation of Karaite life there and in Russia, which altimately helped rise of Turkic nationalism.
(Arka Kapak)