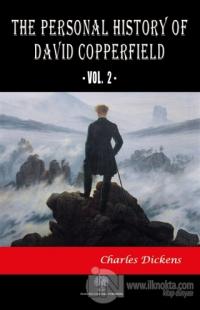 “He assented to this in the most earnest manner; and implored me, if I should see him wandering an inch out of the right course, to recal him by some of those superior methods which were always at my command. But I regret to state that the fright I had given him proved too much for his best attempts at concealment. All the evening his eyes wandered to my aunt's face, with an expression of the most dismal apprehension, as if he saw her growing thin on the spot. He was conscious of this, and put a constraint upon his head; but his keeping that immovable, and sitting rolling his eyes like a piece of machinery, did not mend the matter at all. I saw him look at the loaf at supper (which happened to be a small one), as if nothing else stood between us and famine; and when my aunt insisted on his making his customary repast, I detected him in the act of pocketing fragments of his bread and cheese; I have no doubt for the purpose of reviving us with those savings, when we should have reached an advanced stage of attenuation.”