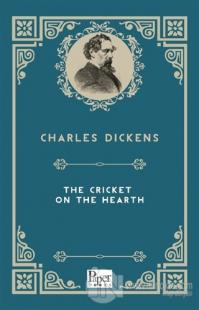 The Cricket on the Hearth
Charles Dickens

https://www.ilknokta.com/charles-dickens/the-cricket-on-the-hearth-1.htm
The Cricket on the Hearth
Paper Books
41.00

The Cricket on the Hearth: A Fairy Tale of Home is a novella by Charles Dickens, published by Bradbury and Evans, and released 20 December 1845 with illustrations by Daniel Maclise, John Leech, Richard Doyle, Clarkson Stanfield and Edwin Henry Landseer. Dickens began writing the book around 17 October 1845 and finished it by 1 December. Like all of Dickens's Christmas books, it was published in book form, not as a serial.
Dickens described the novel as “quiet and domestic [...] innocent and pretty.” It is subdivided into chapters called “Chirps”, similar to the “Quarters” of The Chimes or the “Staves” of A Christmas Carol.

In July 1845, Dickens contemplated forming a periodical focusing on the concerns of the home. It was to be called The Cricket, but the plan fell through, and he transformed his idea into a Christmas book in which he abandoned social criticism, current events, and topical themes in favour of simple fantasy and a domestic setting for his hero's redemption, though some have criticised this notion. The book was released on 20 December 1845 (the title page read “1846”) and sold briskly into the New Year. Seventeen stage productions opened during the Christmas season 1845 with one production receiving Dickens's approval and opening on the same day as the book's release. Dickens read the tale four times in public performance.