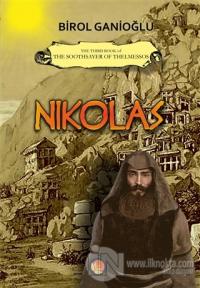 The Third Book of The Soothsayer of Thelmessos
Birol Ganioğlu

https://www.ilknokta.com/birol-ganioglu/nikolas-1.htm
Nikolas The Third Book of The Soothsayer of Thelmessos
Lotus Yayın Grubu
80.00

The Soothsayer of Thelmessos Series, aims to describe the Lycian Civilization which lived thousand of years ago in the region known as Teke Peninsula, in the southwest of Anatolia in the form of a novel.

Mother Syessa, is the first book in this series and begins in the 40s BC. While describing the life of a mother goddess priestess, the qualities of the Lycian Civilization and its different aspects from other civilizations are explained.

Apollonides, is the second book in the series and begins in the 20s BC. While the life of an Apollon priest told, complementary information of the Lycian Civilization and the relations of Lycia with its neighbors are told.

Nikolas, is the third and final book in this series and begins at the end of the third century AD.
Early Christianity, religious beliefs at that time, and ancient philosophy are explained based on what is known about the life of Saint Nicholas who is known as Santa Claus today but is a real historical figure.