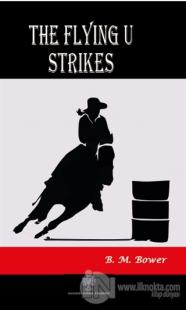 The Flying U Strikes
B. M. Bower

“Big Butch without a doubt, he was thinking; Big Butch or one of his men, trying to get even for Cash Farley. Not even a wisp of smoke across the gulch gave a clue to his whereabouts, and to go back and search for him was worse than useless. He might be anywhere amongst the rocks and brush on the farther wall, and to reach him except with a bullet was practically impossible. No use saying anything to Weary about it, either. Might stir him up to want to go hunting the shooter—and while they were getting into the gully and across to the other side, they would be easy targets. Chip had enough experience with that sort of thing to feel no desire whatever to make the attempt.

It was plain Weary had not heard the shot. “No more carcass hunting to-day,” he declared, misinterpreting Chip's pause. “You couldn't get me down into another coulee on a bet. I've got enough on my mind with them eighty-three we already counted. Come on. We'll pick up them horses and hit for home. That's work enough for to-day, if you ask me.”