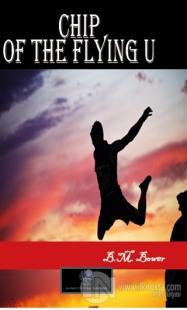 Chip of the Flying U
B. M. Bower

https://www.ilknokta.com/b-m-bower/chip-of-the-flying-u-1.htm
Chip of the Flying U
Platanus Publishing
44.10

“The “vigilantes” drew hastily out of the road and scudded out of sight down a gully as the creams lunged down the steep grade and across the shallow creek bed. Fortunately the great gate by the stable swung wide open and they galloped through and up the long slope to the house, coming more under control at every leap, till, by a supreme effort, Chip brought them, panting, to a stand before the porch where the Old Man stood boiling over with anxiety and excitement. James G. Whitmore was not a man who took things calmly; had he been a woman he would have been called fussy.

“What in—what was you making a race track out of the grade for,” he demanded, after he had bestowed a hasty kiss beside the nose of his sister.

Chip dropped a heavy trunk upon the porch and reached for the guitar before he answered.

“I was just trying those new springs on the buggy.”