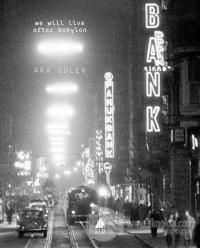 We Will Live After Babylon (Ciltli)
Ara Güler

This book brings together the short stories Ara Güler penned during his early period, and his photographs. Güler is known internationally as a photographer and considered the most important representative of creative photography in Turkey, however, he is a relative unknown as a short story writer, and the various aspects of Güler the writer appear in breathtaking range in We Will Live After Babylon. This new edition of three simultaneously published volumes in Turkish, Armenian and English, brings together Güler's visual production with his texts, who appear to also takephotographs through the medium of the short story, to form a “photograph-short story album”. Güler thinks that his early period short stories have an important role in his ability to “capture meaningful moments and combine them in a narrative”, and describes these 13 short stories as “a kind of photography”. There is no doubt that Güler is a “man of the visual world” and We Will Live After Babylon is a solid proof of that.