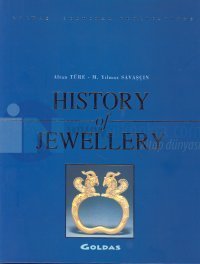 History of Jewellery
Goldaş
25.00
Believing they were guests, natives in North America greeted the invaders led by Cnristopher Columbus with gold laden baskets, unaware of what was going to happen to them. The gold that was brought to Christopher was the first major capital inflow to the European economy while it also triggered the proces which led to the enslavement of the native populations.

As such, first and foremost gold, and all precious gems and stones have had a special significance for man since the earliest days of the "civilisations" that were formed and since the first steps towards a social order were taken. Wars broke out, civilisations were destroyed because of these stones and gems. There were those who even worshipped such precious gems, stones and gold.
(Sunuş'tan)